By Eve Pohl
GOD'S HEART is for Beylanesh
A number of months ago, my 12 year old daughter and I, journeyed through the crumbled, broken streets of Korah; a leper community in Addis Ababa, Ethiopia.  While there, we stooped through the dark, dingy doorway to the far corner of blackness to find Belaynesh, destitute and disfigured by a leprosy that could not hide her mother’s heart. Tenderly in the darkness, she reached for her children and

eagerly introduced them to her unexpected visitors.  An occasional flicker of light trickled in from the adjoining room and somehow we caught a glimpse of her weathered face.  This was her world, somehow surviving, supporting her three children and for those few moments, it also became ours. In the darkness, I couldn’t see that there was only a blanket-less, old strip of vinyl overlapping a piece of cardboard for a bed and I couldn’t see that under a pile of rags lay a young child, burning with fever. I could only see that this grieved my Lord and that this was so far, from what He intended when He created her inmost being, when He knit her together in her mother’s womb, because SHE was fearfully and wonderfully made. (Psalm 139:13, 14)

Beylanesh’s story is heart wrenching, as are many of the people’s stories living in Korah. She was only 22 days old, when she rolled into a fire, which ravaged her feet; leaving her with only a partial foot on her left side… no foot on her right.  So much of her story is still to be learned, yet we do know that she arrived in Korah, as many do, alone, afraid and in despair, desperate for a community that would accept her ‘cursedness’. Belaynesh contracted leprosy; possibly because of the condition of her feet and she was no longer welcome in her village. She had become an outcast and with her children, she escaped from her husband when he attempted to murder her for the stigma and shame she now brought to their family.  In finding this acceptance in Korah, Belaynesh also found complete destitution and hopelessness, as she had no support, no income and had to survive by scavenging for food and competing with hundreds of others, at the adjacent city garbage dump.  Somehow she had to endure, she had her 3 children, one of them having cerebral palsy and they needed food, water and the monthly $13 US for the black, filthy makeshift hovel she now lived in.


The nearest water was a 1 1/2 hour walk in one direction, but how does one do that and carry back the 50 pound jug, with young children and with a footless stump shoved onto a chunk of wood, wrapped in cloth and tied around the bottom of her ravaged leg?  I do not know, but she did it and when I met her that day in the darkness, she greeted me with humility and touched my heart with her gentle smile… I could hardly grasp the full reality of what I was experiencing.  To meet someone whom God treasures and values so deeply and yet is so forgotten by man is hard to put into words.  To pray aloud in the darkness of her home, to hug her, smile with her and weep in my heart for her and others who are as beautiful and precious as she is, yet so forgotten and unknown is indescribable.
BUT I saw, that in all of this, GOD had not forgotten! He was there and He saw her pain and the desperation of so many others in Korah.  Belaynesh’s story is changing… and there is much more to come.  God brought her to the attention of Sammy Liben and Great Hope Church and through them He has allowed me the privilege and honor to be a part of her life.  Through “Family Sponsorship,” she and her children are now a part of our family. With the help of Great Hope Church we have been able to provide the financial support so that she no longer has to beg or go to the dump for food. The church leadership has moved her from the black hole she was living in, to another home in Korah, which has a solid roof to protect her from the seasonal rains. Her 8 year old daughter now attends the local school and her disabled son will soon have the opportunity to see a doctor to be properly diagnosed/treated and if possible to have his crossed-eyes examined and eye glasses purchased.
Entering into someone’s life and deciding to make them a part of your family from such a distance may seem challenging, but God has a way of making His world so small.  He continually provides us opportunities to connect with Belaynesh and to share His love with her in tangible ways. We feel equally blessed and in the few short months since I met her, He has far exceeded in answering so many of the prayers I have had for her and her children.   By far one of the most joyous moments came when He unexpectedly provided her with prosthetic shoes through the love and care of others whom He has brought into Korah.  For the first time in 40 years Belaynesh has feet and she can walk!! Although Beylanesh still has significant needs, she is moving past the critical needs phase and we hope to support her in different ways as income generation projects, training and education are developed through the church or perhaps the community center they hope to build.
When I last connected with Sammy Liben his words to me were…“My heart feels with joys of tears to think how the Lord is moving for korah people and to think the way he rase good compassionate people to help… When i always see Belaynesh at the church how the lord reached her and say enough of of her greif.”

When Beylanesh first came to Korah, she was Orthodox, but Sammy told me, that she is now going to Great Hope Church and I just recently learned that she has become a Christian and is going to be baptized -- Beylanesh has hope and a future!  Talk about transforming lives! It is incredible! How can that be? A few months ago I never knew of her existence, this crippled woman, malnourished and destitute, with her 3 children living in darkness, in a hovel in the middle of a city of 3 ½ million people, on the other side of the world.  How did it happen that I would come to know her? That I could be a part of God blessing her and her children?  It is unbelievable!  It is God’s heart! He saw her, He knew her, she was so beautiful to Him and He had not forgotten! God’s heart is for Korah. I can’t tell you how exciting it has been to be a part of that!  To be a part of His story! 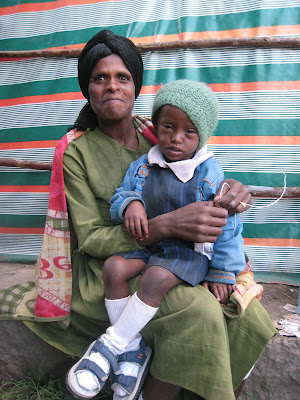 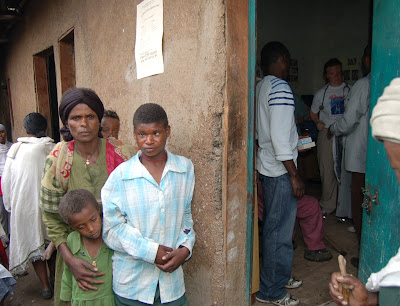 Waiting in line to see one of our nurses 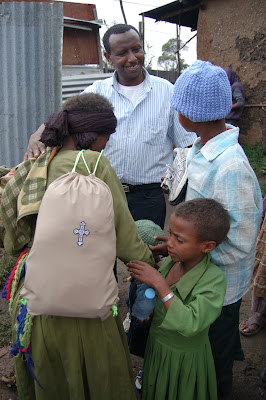 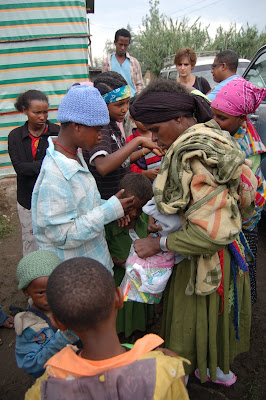 JUNE 2010
A few months after returning home,
God gave us a special messenger;
to bring our love to Beylanesh.
Pastor Koen from our home church
was able to visit Beylanesh with Pastor Antonoh
from Great Hope Church and bless her in her new home... 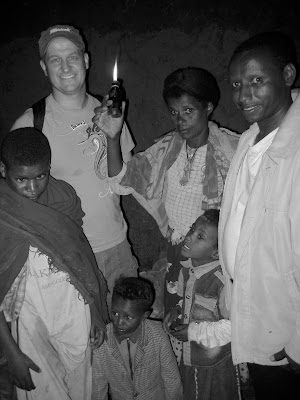 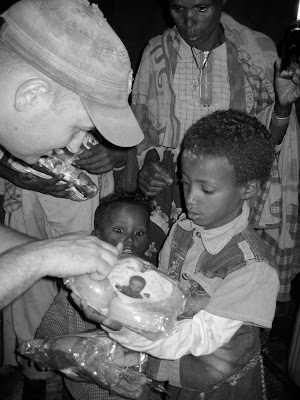 SEPTEMBER 2010
NEW FEET FOR BEYLANESH!
“I waited patiently for the Lord; he turned to me and heard my cry. He lifted me out of the slimy pit, out of the mud and mire; he set my feet on a rock and gave me a firm place to stand. He put a new song in my mouth, a hymn of praise to our God. Many will see and fear and put their trust in the Lord. Psalm 40: 1-3

DECEMBER 2010
APRIL 2011
I will be back in Korah and can give Beylanesh
a BIG HUG for myself!! What a blessing she is to our lives!

TO READ ABOUT OUR AMAZING REUNION PLEASE READ
RETURNING TO KORAH & REUNITING WITH BEYLANESH
You won't believe what a difference Family Sponsorship made!!!


If you would like to receive information on the Hope for Korah Family Sponsorship Program please contact Eve at eve@hopeforkorah.com

Read how you can make a difference in the life of a family:
Four Korah Families Need Sponsors